Posted on September 5, 2014 by marketappeal 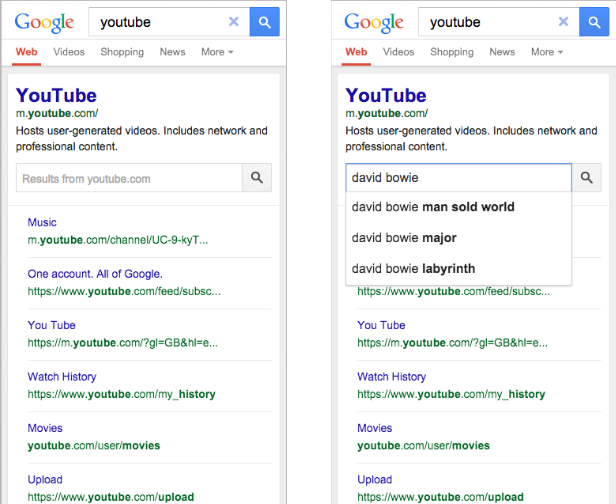 It might not be unusual to report that Google has made changes to search, but this time is slightly different – Google has updated the sitelinks search box which appears within results, offering search options for specific domains. The search box has now been moved above the sitelinks to make it more prominent and has autocomplete enabled. Perhaps most exactly, Google now promise that with the right markup, you can set the search box to direct users straight to your own site’s search pages, rather than keeping them within Google, getting them onto your site and looking at your content sooner.

Microsoft only announced Bing’s new image widget a couple of week’s ago, and already Reuters reports that they’re the subject of a lawsuit from Getty Images over the “massive infringement” of copyrights. The widget allows publishers to display a selection of images drawn from Bing’s image search, but Getty claim that it’s ignoring these images’ copyright, allowing mass violations. “In effect, defendant has turned the entirety of the world’s online images into little more than a vast, unlicensed ‘clip art’ collection for the benefit of those website publishers who implement the Bing Image Widget, all without seeking permission from the owners of copyrights in those images,” the lawsuit states. A Microsoft spokesperson has that they will “take a close look at Getty’s concerns.”

Facebook is apparently testing a feature to allow mobile users to search old posts from friends and pages by keyword. A Facebook spokesperson confirmed: “We’re testing an improvement to search on mobile. In this test you can use keywords to search for posts you’re in the audience for on Facebook.” Users will be able to search for any old content posted by their friends or by pages that they follow. Only certain users seem to have the new feature, and Facebook has not yet announced any plans for a wider rollout.