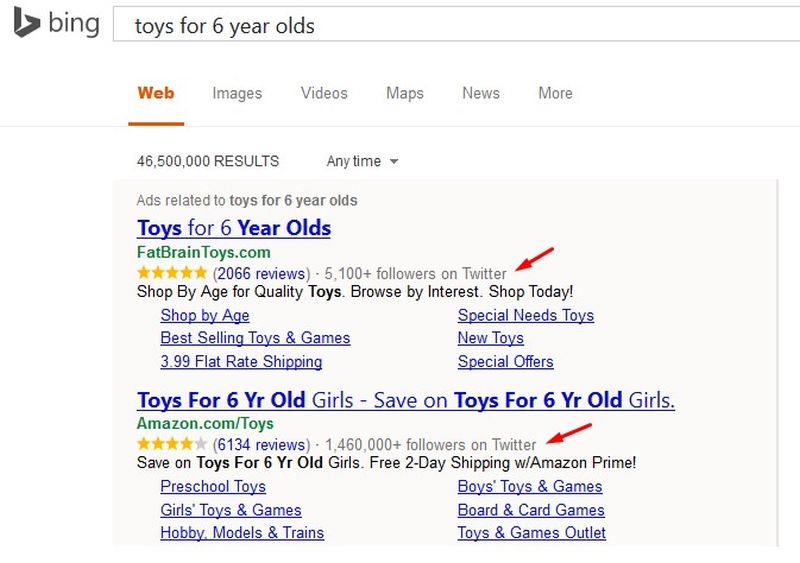 Bing’s long-running partnership with Twitter has yielded a new feature – some ads running on Bing now display the number of Twitter followers that the advertiser has. The feature is similar to Google’s annotations displaying advertisers’ Google+ followers, but a Twitter follower count might be more likely to resonate with users. The feature appears to still be under tests, and is not displaying for all users, but it seems likely that this could become a permanent addition to the search engine.

Google seems to be continuing its efforts to incentivize good mobile site design, with some users reporting that they’re seeing a new icon in mobile searches to indicate that a site does not have either responsive design or a mobile version. The icon is a grey outline of a smartphone with a slash through it, and appears immediately to the left of the URL in search results. Google is also known to be testing an icon that shows that a site is mobile-friendly, so Search Engine Watch suggests that the company might be “running an A/B test to see which version is better for its user interface.”

Google Chairman Eric Schmidt surprised the audience at a speech in Berlin this week by announcing that the company’s biggest search rival is in fact retail giant Amazon. “Many people think our main competition is Bing or Yahoo. But, really, our biggest search competitor is Amazon,” Schmidt claimed. He further explained, “People don’t think of Amazon as search, but if you are looking for something to buy you are more often than not looking for it on Amazon. They are obviously more focused on the commerce side of the equation, but, at their roots, they are answering users’ questions and searches just as we are.” Schmidt also admitted that the company is wary that a Google-killer company is out there somewhere: “But more important, someone, somewhere in a garage is gunning for us. I know, because not long ago we were in that garage. Change comes from where you least expect it.”